The Challenge for EMS:  Getting Airways Right

“[If it takes] my sister’s death to awaken the situation, we’ll definitely want to figure out what’s going on and get to the bottom of it.”

Kerry Duarte reflected on his family’s frustration about his 38-year-old sister Paula’s death; she arrived at a hospital with an endotracheal tube in her esophagus. Her death, along with a pattern of similar events, led to a deep investigation and a political quagmire in Rhode Island. Underlying it all sits a simple fact. Patients die from improperly inserted endotracheal tubes.

Paula Duarte died not long after a pattern of airway deaths had been identified in her state.

Sometimes, the insertion goes awry; other times the tubes become dislodged after placement. Tragically, simple science says that a patient without an airway will eventually die. Yet, EMS providers have different ideas about the solution. The puzzle becomes even more complicated as politicians get involved.

Dr. Nick Asselin, the EMS Medical Director who initiated the Rhode Island study, and his colleagues have learned how pervasive and divisive this conflict can be. The details of the Rhode Island investigation and the political response that followed appear in two articles published this month in ProPublica.[1],[2] That state’s experience is not unique, as the extreme diversity in the nature and financial resources of EMS agencies creates conflict about solutions.

Deep discussion of the underlying political tension falls far beyond the scope of this blog, but it still deserves our attention. The patient safety issues presented by Dr. Asselin’s work reflect ongoing challenges in the EMS community. In fact, the Center for Patient Safety (CPS) has focused on those challenges since the problem showed up in its event data many years ago.

Many CPS educational programs have highlighted Drew Hughes, who died from a similar mishap in 2013.  Drew’s father David works tirelessly to educate healthcare providers about the risks of both improper intubation and the failure to use tools like wavelength capnography to monitor intubated patients. Mr. Hughes has generously shared his story through webinars and other contributions to educational events sponsored by the Center for Patient Safety, as well as articles for the EMS community.[3] Yet, the tragedies continue to mount. 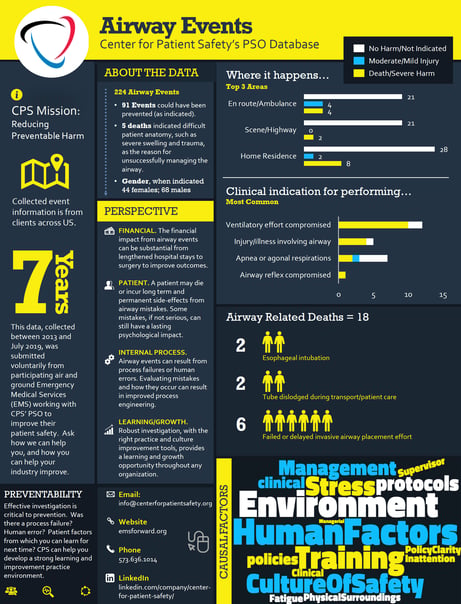 CPS, a Patient Safety Organization (PSO), gathers data about airway mishaps from its EMS participants. Between 2013 and 2019, 14 patients died or suffered severe harm from airway-related events. Six more encountered a minor-to-moderate injury. Some reports did not contain complete details, but we know that four patients died from either esophageal intubation or a dislodged tube. Six others died from failed or delayed airway placement.

Why is this still an issue? Many factors seem to contribute to the problem, so the suggested solutions vary widely. The ideas below provide starting points – realistic and action-oriented steps for all EMS agencies.

While professionals may differ about the best solution, failure to improve airway care is not an option. Kerry Duarte’s heartbreaking words softly express our call to action. “For it to happen to somebody else would be pretty sad, you know?”

The Center for Patient Safety offers Patient Safety Organization (PSO) solutions for EMS, which allows providers to report adverse outcomes and safety concerns, while providing federal protection for their quality and safety work. Addressing serious safety concerns requires a strong safety culture, and CPS can help EMS agencies assess and improve their culture. Learn more on the CPS website or contact the Center at info@centerforpatientsafety.org.

[1] “EMS Crews Brought Patients to the Hospital With Misplaced Breathing Tubes.  None of Them Survived,” (ProPublica December 3, 2019) https://www.propublica.org/article/ems-crews-brought-patients-to-the-hospital-with-misplaced-breathing-tubes-none-of-them-survived

[2] “A Mislplaced Breathing Tube Can Be Fatal. New Studies Suggest They Should Be Used Less Often” (ProPublica December 3, 2019)  https://www.propublica.org/article/a-misplaced-breathing-tube-can-be-fatal-new-studies-suggest-they-should-be-used-less-often

[3] “Do It for Drew by Checking and Re-Checking Tube Placement” (EMS1 February 15, 2016) https://www.ems1.com/ems-products/medical-equipment/airway-management/articles/do-it-for-drew-by-checking-and-rechecking-tube-placement-GZdDXQd43kUywTw0/